Hear from a Peer: How to Make Time for Team Bonding

Get team-building tips that will work in your organization.

Team-building initiatives don’t have to come from the top. As your office’s go-to planner, you may be a natural for the role of “quarterback” in these efforts.

Need some ideas for bringing staff together? We asked members of the Staples InsidersNetwork to tell us: What is one thing you try to do regularly to help encourage team spirit at your office? Some of the responses may give you inspiration for getting a team-building event or program off the ground.

Alice, office manager: “I started a weekly social called the Stand Up and Share that gives people a chance to mingle and learn a bit about each other. Each week, a different person hosts by picking a topic and bringing snacks — no more than $20 worth. The socials are structured as half-hour meetings and include time for mingling and chatting. The topics range from work-related updates to ‘how I spent my summer.’ Sometimes, the hosts bring a game for us to play, or they bring an idea they want feedback on.” 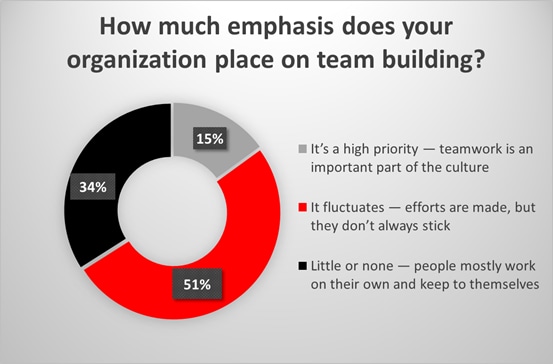 Team building gets short shrift at many companies, but that could create opportunities for you to take the initiative.

Alice makes a point of looping in remote employees, who call in for each week’s event. “The socials are a nice chance for people to catch up or to get to know each other, especially people who aren’t in the same department.”

Lynne, office manager: “My team and I try to go out to lunch once a month, on a Friday. As their manager, I think it’s important to get to know them outside the office. These lunches give us a chance to let our hair down, so to speak, and get to know each other on a personal basis.”

The tradition is just a few months old, but it’s already made a difference. Connecting away from the office has helped the group work better as a team. “When you can talk and laugh outside of the office, you develop a camaraderie,” Lynne says. “You get to know each other’s idiosyncrasies, so you don’t take things so personally. It also lets my team know that I have their back.”

Angela, senior support services coordinator: “Our staff does 15-minute team-building games every other Wednesday morning. I split each department up into six groups so that each team has different department members. We play a mix of work-related and non-work-related games: Yahtzee, office trivia, ladder toss and cornhole, just to name a few. Each game requires teams to work together to win.”

The company keeps track of each team’s score, and at the end of six months, the winning team gets $150 to spend on lunch. Along with the friendly competition, Angela says, the games give employees who normally don’t interact a chance to get to know each other.